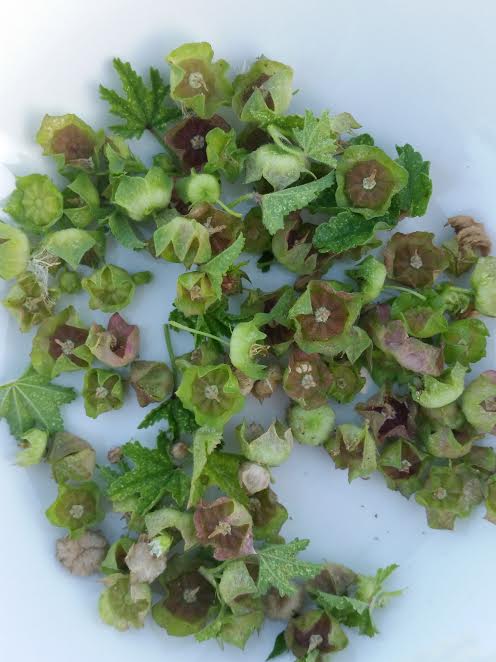 Spotted these mallow seeds in the garden the other day and ate them fresh. I also fried them up for a few minutes with some small mallow leaves in a little b.d farm butter and Murray river salt as a little snack. Pick the seed heads while they are still young and green. They are still ok when turning mauve but once they are brown and dry they are too tough to eat.

There’s a saying in southern Italy ‘La malva da ogni male ti salva’ meaning Mallow saves you from every disease. Mallow has been used extensively across the planet as both food and medicine. In China they have used mallow as a staple vegetable for over 2500 years. The Egyptians and later the french also used the mallow Althaea officinalis to make a marshmallow dessert. This was the healthy precursor to the modern factory made sweet of the same name.

Malva negecta and over twenty other similar Malvas are edible. In the garden it:

The young leaves can be used in salads and older leaves can replace spinach in recipes. Leaves can be added to pesto and green juices. The young green seed heads can be pickled like capers, eaten fresh, added to any salad or cooked dish, or fried in butter and salt and added as garnish to dishes. The root can be used like a potato. The blended root can be used as an alternative to dairy milk. Mallow leaves can be dried and made into tea with a clearer stimulant effect on the body than caffeine. Any part of the mallow can be eaten including the flowers.

Beyond food, older stems and roots of mallow can be prepared into fibre. Soak in overnight and crush the roots, the fibres break apart and can be woven together to make twine. Mallow has also been used as medicine all over the world as an anti-inflammatory, expectorant, anti-bacterial, and an emollient to name a few uses.

1 medjool date or 2 tablespoons of honey

Blend all ingredients and strain. Store in fridge and use in place of dairy milk.